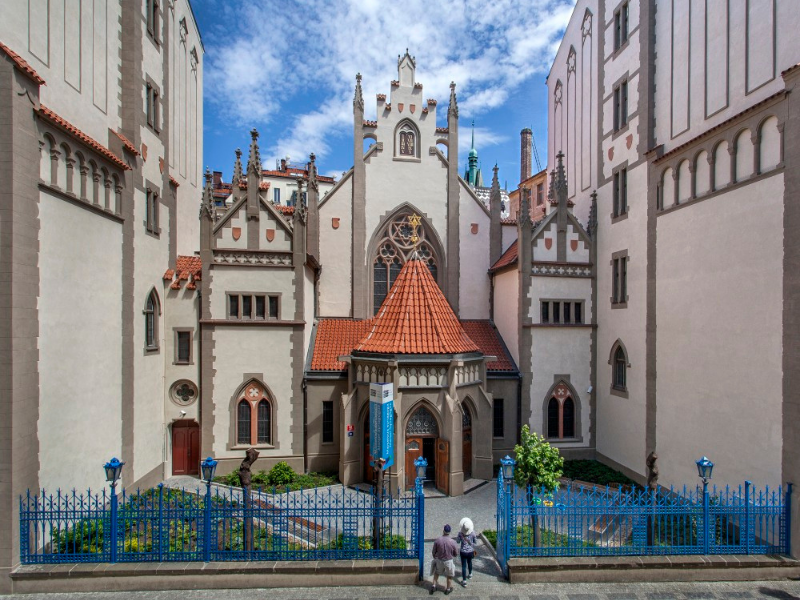 It was built on the basis of Rudolf II privilege as a private synagogue of Mordechai Maisel, the primate of the Jewish community, in 1590 - 1592. The builder Juda Coref de Herz designed a Renaissance three-aisle building, unusual for the time, with distinct Gothicising features. The construction was conducted by Josef Wahl. Extensive and imposing synagogue was built on 20 pillars. The founder Maisel donated lots of precious ritual objects. The synagogue was re-built several times throughout the years. It burnt down completely in 1689, and during reconstruction after the fire, it was shortened to only 14 pillars. The main aisle was built on the old ground plan, vaulted over by a barrel vault; the side aisles had storey galleries. In 1862 - 1864, it was rebuilt by architect J. M. Wertmüller. The sanitation of Josefov at the turn of the 19th and 20th centuries required a new, pseudo-Gothic reconstruction based on the design of architect Alfred Grott with false ribs, built-in gallery, new windows and new-Gothic interior equipment.

During the World War II, the Nazis collected around 6000 objects of art from other 153 Czech and Moravian synagogues, of which they wanted to create an Anti-Jewish museum. The collection was handed over to the National Jewish Museum in 1950, which later presented a fixed exhibition named The Silver of the Czech Synagogues in the Maisel Synagogue. The interior went through a reconstruction in the 1960s, and a general renovation took place in the 1990s. At present, there is a fixed exhibition of the Jewish Museum in the synagogue, named History of the Jews in Bohemia and Moravia from the 10th century until the 18th century.

We recommended our tours to the Maisel Synagogue