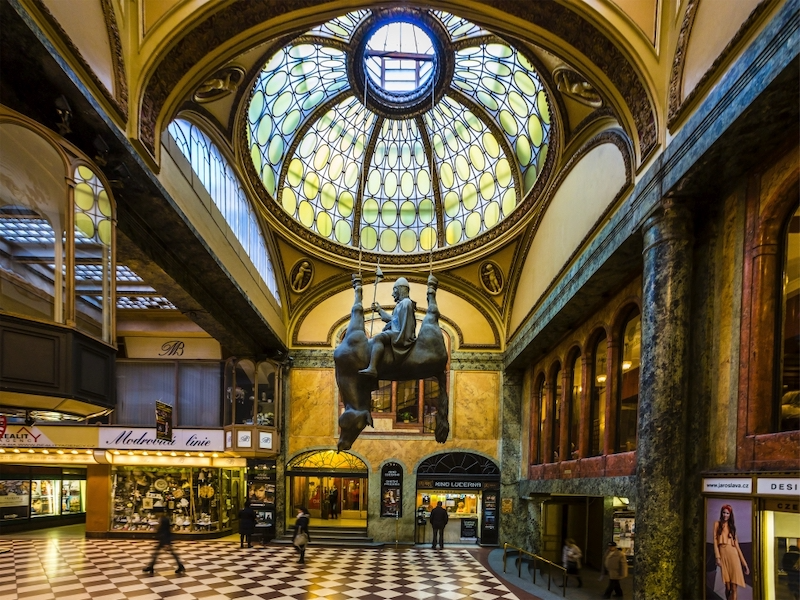 Each era has its own symbol that embodies its spirit, its atmosphere and its possibilities. The Gothic period in Prague is embodied by St. Vitus Cathedral or the Bridge Tower, the Renaissance by Queen Anne's Summer Palace. Baroque is represented by the massive mass of St. Nicholas Cathedral, and if you say Art Nouveau, everyone thinks of the beautiful Municipal House, a symbol of the proud city.

For the transitional period between Art Nouveau and modern styles around World War I, the Lucerna Palace is just such a typical building. It is the manifestation of the futuristic dream of a modern city where social, cultural and commercial facilities meet in space. It is the first arcade building in Prague, the forerunner of all modern arcade buildings, corridors, vibrant underpasses and metro stations. Underneath the ornamental elements of the receding Art Nouveau period, the modern construction possibilities of reinforced concrete, luxferous ceilings, a combination of metals and large glass surfaces are used here in a completely unique way. Just as the Municipal House is an expression of the growing self-confidence and power of the city, which was considered the centre of the newly resurrected Czech nation, buildings such as the Lucerna and the Crown already belong to the new generation of entrepreneurs that emerged from the turbulent development of the Czech economy in the second half of the 19th century. They complete a phase of the building transformation of Prague, at the beginning of which stands the now much-discussed redevelopment of some of its old but picturesque parts, and at the end the construction of modern multi-purpose buildings with elements that already foreshadow the modernist architecture of the period between the world wars.

The spiritual father of the Lucerna Palace is the engineer, designer and builder Vácslav Havel (1861-1921). He came from an old Prague family and, although he was originally from relatively modest circumstances, he eventually managed to establish a building firm that focused on the construction and sale of tenement houses. The projects were mostly created by the owner himself, but since he was unable to complete his studies due to his material circumstances (he was not awarded his degree in engineering until 1917), he had to have an experienced engineer as a partner. For many years this was the builder Josef Čamský, who also participated in the design of the first stage of the construction of the Lucerna.

The idea to build a modern multi-purpose centre in the centre of Prague was born in 1905, and therefore V. Havel was looking for suitable building plots. He succeeded in purchasing the old Bělský Palace in Vodičkova Street and the adjacent house. In 1906, preparatory work began and on 16 September 1907, a building permit was issued by the magistrate of the Royal Capital of Prague.

Construction took place between 1907 and 1911, and in 1909 the use of parts of the building was already permitted. The result was a seven-storey, three-tract building, which was connected by a staircase to a transverse two-storey court building with a hall on the second and third floors. The courtyard between the two buildings was covered by a glass structure. The main façade facing Vodičkova Street was designed to be symmetrical, eight-axial, with the exception of the parterre, and articulated on the sides by continuous bay windows and balconies with richly decorated railings.

A simple attic in the centre with a tympanum completed the façade, which gave the building its name. The ground floor and the mezzanine were divided by large areas of shopfronts interrupted in the second axis from the right behind the entrance to the passage. The decorative sculpture and stucco decoration, originally theatrical but soon converted into a biograph, occupied the central and left balconies. There were 824 seats in the auditorium. Underneath, in the place of today's cafeteria, was a foyer with a dressing room, which was entered by a three-armed staircase from the vestibule, whose mirrored wall ended the passage of the first stage of construction.

In 1912, the Council of the Capital City of Prague opened the entrance to the building with a staircase with the entrance to the staircase. The garden of the Aerenthal Palace in Štěpánská Street was allowed to be converted into a building plot in 1919, and by combining it with the space of the adjacent house no. 628/II, the building could be extended. In 1913 a building permit was issued and work began. Havel's partner in this stage of the construction was Dobroslav Bezectný and the later academic Stanislav Bechyně worked on the statistical calculations. Despite all the technical and financial difficulties caused, among other things, by the outbreak of the World War, work continued until completion in 1921.

The result was a building that contained unique architectural elements for its time. The connection of Vodičkova Street and Štěpánská Street created a new passage and thus the first passage house in Prague. The other passages, Hvězda and the house at Nováků, which are often erroneously included in the Lucerna complex, were built later and were connected to the original passage. The space contained several halls, offices for shops, apartments and studios, and in the passage there were shops and self-service refreshments on the principle of the then modern cafeterias.

We recommended our tour The jewel of architecture 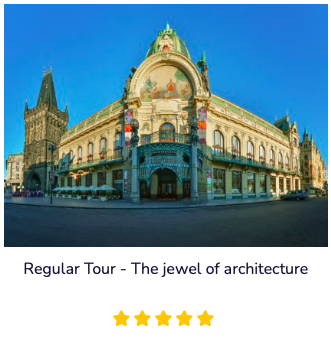