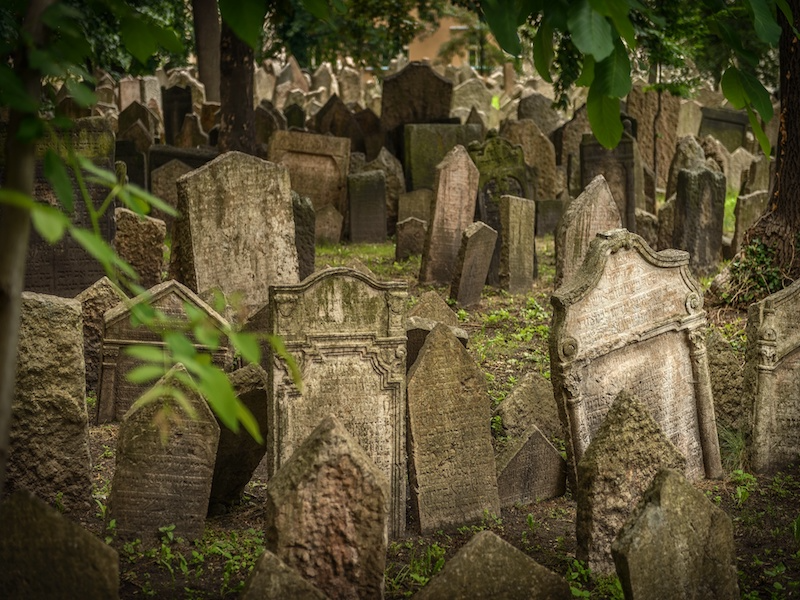 It is the third known Jewish burial place in the Prague’s territory. The oldest Jewish cemetery in Prague was probably in place of today’s Míšeňská Street (some authors believe it was in Újezd). The second medieval Jewish cemetery (called Jewish Garden) was in place of the later New Town by the Vyšehrad path. It was probably functional from the 13thcentury until the year 1478, when Vladislav II abolished the burial place, being pressed by the New Town citizens to do so. Fragments of tomb stones with years from the 2nd half of the 14th century were found during the construction of the Burgess meeting hall (Měšťanská beseda) in Vladislavova Street in 1866, and they were moved to the Old Jewish Cemetery.

This cemetery was probably established at the turn of the 14th and the 15th centuries. The oldest preserved tombstone is from 1439. The cemetery was extended several times via buying out the neighbouring land plots. Burial services were abolished in 1787, when a decree of Joseph II prohibited utilization of burial places inside the inhabited parts of the town. The main Jewish burial place was then transferred to the former plague cemetery in Žižkov. During the sanitization of Josefov in 1903, the Jewish community was forced to yield a part of the cemetery to the construction of a new road (today’s 17th November Street). Exhumed remains were buried in another part of the cemetery, on a Nefel mound in front of the Klausen Synagogue, where small children younger than 1 month were buried from the beginning of the 18th century. During the sanitization, the burial society had a new ceremonial hall built according to a project of architect J. Gerstl in a new-Romanic style, which served its purpose only until the beginning of the 1920s.

There are more than 12,000 tomb stones in the Old Jewish Cemetery, yet there are many more remains buried here. Many tombstones fell in the lower layers, and other, namely the wooden ones, were destroyed over time. Because the religious habit prohibits the Jews from abolishing old funerals, and the land plot was too small to meet the needs, more and more layers of new earth was brought to the cemetery, and older tombstones used to be elevated into higher level, until there were up to 12 layers and many places are characteristic for piles of stone tombstones from different centuries right next to each other. For centuries, the cemetery has been administered by the Prague Burial Society, which has also started to process the tombstone inscriptions systematically.

At the turn of the 16th and the 17th centuries, plastic symbols and emblems of families, names, statuses and occupations begin to appear on the originally simple tombstones. The Baroque era is often marked by the occurrence of some kind of a quadrilateral tumba (small house). Prague is the only place in Europe with so many of these preserved. One of the Renaissance-Baroque sarcophagi covers the tomb of the Prague ghetto’s most significant thinker and the Talmudian school rector, rabbi Jehuda Löw. There is a Renaissance tumba of the Prague ghetto Maecenas and the primas of the Prague Jewish Community Mordechai Maisel. Many tombstones contain symbols stemming from the Jewish tradition, such as a bunch of grapes (symbol of fertility and wisdom), a moneybox (symbol of charity), or the hexagram star of David. The origin and the family of the deceased can be marked, for example, by blessing hands (the descendants of the temple priests), by a kettle with water or musical instruments (descendants of the helpers from the Levit tribe), or by symbols of animals for personal or family names (lion, wolf, goose, rooster, etc.), and reliefs of tools to symbolize occupation (mortar - pharmacist, scissors - tailor, violin - musician, etc.). The texts often contain different laudations and other interesting data the deceased, besides the basic data. Date of death or of the funeral is sometimes expressed via the so called chronosticha (Hebrew expresses numbers by letters according to their position in the alphabet) according to the Jewish era, which is 3760 years behind the classical era.

There are maples, ash trees, locust trees and elderberries growing in the cemetery. The Old Jewish Cemetery has been a National Cultural Monument since 1995.

We recommended our tours to Prague Jewish Quarter